“The best way to win a fight is to walk away from it before it begins.”
— Sifu Slaughter

Sifu Slaughter began training in Chinese Martial arts at the early age of eight years old. Over decades of training and teaching, Sifu realized that learning, patience, and discipline pave the long path to wisdom. Sifu carries forward this philosophy – a philosophy that characterized traditional Chinese “closed school” systems – into an open school where his teaching style demonstrates that every student should be taught what the individual student is ready to learn.
At the core of Sifu’s teaching are two foundational elements: the training of the body, to build confidence in the individual’s physical abilities, and training of the mind, to release personal ego that often gets us into trouble. The Marines have a saying, “Pain is weakness leaving the body,” but Sifu has another: “Frustration is ego leaving the body”. When both are gone, a wiser, stronger, more confident individual remains.

Numerous accolades have come to Sifu unsolicited over his long career from such newspapers and magazines as: the Pittsburgh Asian News, the Erie Chinese Journal, the Pittsburgh Tribune-Review, Kidz’n Cranberry, the Cranberry Eagle, The North Journal Star, the Pittsburgh Post-Gazette and The Senior Times.

Sifu Slaughter’s reputation for sincerity, patience in teaching, and dedication to his art have become widely known and respected throughout the greater Pittsburgh area and beyond. His many personal successes, years of teaching, volunteer activities in the senior community, and participation and judging (both personally and through his students) in martial arts tournaments across the country have earned Sifu Slaughter great respect and recognition throughout the martial arts communities.

On June 30, 2018, at the ICMAC 20th Anniversary Orlando Tournament, Sifu Slaughter was inducted into the ICMAC Hall of Fame for masters and grandmasters. This award recognizes Sifu Slaughter’s dedication and many contributions to Chinese martial arts, as well as his, and his school’s, consistent participation and volunteer work with the ICMAC tournaments over the past 20 years.

Many teachers, mentors and training brothers have helped Sifu Slaughter on his long journey, sharing their wisdom and instruction, and helping him to grow into the martial artist he is today. To these fine martial artists – and in particular to Sigung Brian Felter – Sifu and his students give thanks and appreciation for their patience and generosity in passing on their learning. 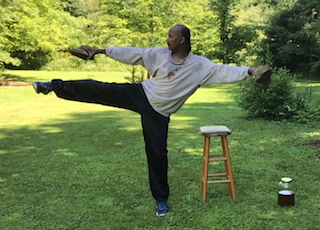