The black belts competed in individual open hand forms (called “patterns” in tae kwon-do tradition), individual weapons forms, and as part of the demo team with the color belts. They did well against fierce competition, winning 2 gold medals and 3 bronze medals in the individual competitions, with the 2 gold medalists competing in the Grand Championship finals. 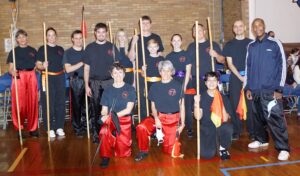 It was wonderful to see all our friends from the taekwondo community again, and we are grateful to be included. Watching the intensity, control, and power of their performances always inspires us to work harder at our own art and gives us a greater appreciation for the beauty and variety of other martial arts disciplines.

Many thanks to Sifu Slaughter for all his hard work and patience in working with his students to prepare them for this tournament, and many thanks to Master Zang, Master Gorino, the many judges and scorekeepers who volunteered their time, and all the folks who help organize and help make these tournaments a reality.

And a big thank you to all who performed!