Sifu Slaughter’s Chinese Martial Arts school competed in the International ICMAC 21stAnnual Invitational Chinese Martial Arts Championship July 5-7, 2019.  Competition was tough once again this year with competitors from all over the USA and many other countries competing in traditional Kung Fu styles, Wushu, Tai Chi, sparring, partner forms and others. 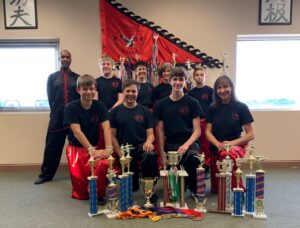 Tournament Team Getting Ready to Head to Orlando

The school was represented by eight of Sifu’s senior students (four adults and four youths), many of whom were competing in a tournament for the first time.  The students competed in several traditional Kung Fu divisions including open hand, long, short and open weapons, and partner forms.  The team took home 3 gold medals, 3 silver medals, 2 bronze medals and a Grand Champion Cup – the 3rd International Grand Champion for Sifu Slaughter’s CMA school! 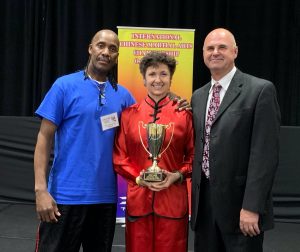 Amazing team competitions were performed by several schools, followed by a Masters’ Showcase that was truly awe-inspiring.  Thank you to all who performed!

Above all, it was a great honor to meet and watch the performances of so many talented martial artists from many different Chinese disciplines.  We all gained a greater appreciation for the many different styles of Chinse martial arts, the hard-work and talent of so many competitors and masters, and a renewed determination to continue our own journeys in the art.

Many thanks to Sifu Slaughter for all his hard work and patience in working with his students to prepare them for this tournament, and many thanks to Master Scrima and all the folks at ICMAC who help organize and make these tournaments happen!

Opening Ceremonies for the 2019 Tournament